Directions: There are 8 GMAT Graphics Interpretation questions to complete in this practice test. Carefully review each of the graphs and then choose the best answer from the choices below.

Congratulations - you have completed . You scored %%SCORE%% out of %%TOTAL%%. Your performance has been rated as %%RATING%%

Your answers are highlighted below.
Questions #1-2 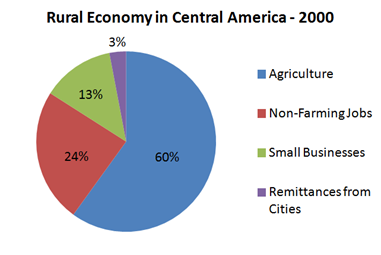 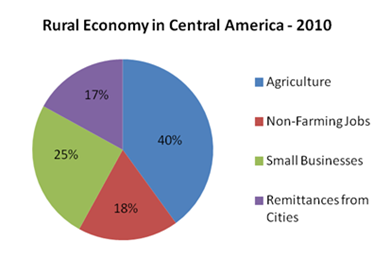 The above pie charts give the percentages of the rural economy in a Central American country for the years 2000 and 2010. The change in the overall earnings for non-farming jobs plus small businesses between 2000 and 2010
Question 1 Explanation:
The correct answer choice is the fourth one - cannot be determined. Don’t be tricked into just adding up the percentages. The charts give the relative portions of the rural economy made up by these 4 items, but nowhere are we told absolute amounts - what was the overall size of the economy in 2000 and in 2010? This is necessary to then calculate the overall earnings in these particular areas in 2000 versus in 2010. Since we don’t know in which year the overall economy was larger, or if they were the same, we cannot make this comparison.
Questions #1-2 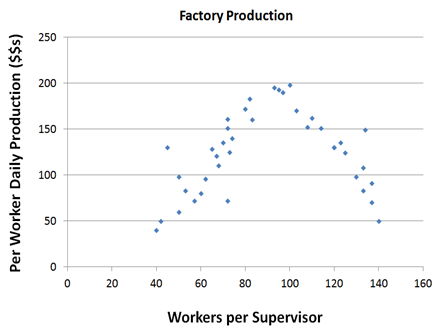 First option - Adding more workers will mean moving to the right on the curve - more workers per supervisor - which clearly has lower productivity. 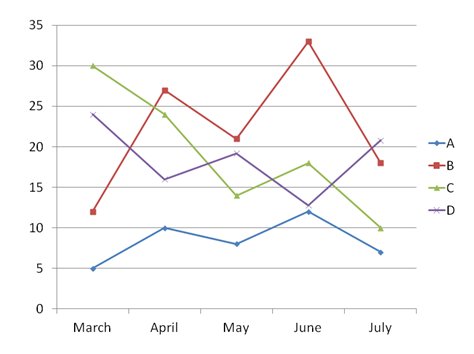 The above graph gives the values for 4 items measured by the police department. One represents the number of crimes reported, one represents the number of arrests made, one represents the number of police officers on staff, and one represents the budget surplus for the department (in $1000s). If the impact of a change enacted by the police department takes a month to register, then we can identify a negative linear relationship between B and
Question 5 Explanation:
If there is a negative linear relationship, that means that when one variable goes up, the other goes down, and vice versa. The new wrinkle introduced by this question is that there can be a one-month lag in seeing this effect. B and D are opposites - when one goes up, the other goes down. If we were to introduce a one-month lag then it’s possible they could correlate directly, not indirectly. With a one-month lag, B and A now seems to be have a negative relationship - when one goes up, the other goes down the following month, and vice versa. But is it a linear relationship - can it be expressed in the form A = mB +c, for some constant values m and c, given a month’s lagtime? You don’t have to do the math, just look at the graph - in the first month, B went up a lot, and in the second month, A went down a little. In the second month, B went down a little, yet in the third month A went up a lot. This is inconsistent - if there’s a linear relationship, then the relative sizes of the changes need to be consistent with each other. Even if you look at the lag in the reverse direction, you’ll notice this same inconsistency.

At this point, you could mark C by process of elimination, but let’s just make sure it works. C shows a decrease in the first 2 months, while B constantly alternates between increases and decreases. So let C lag one month behind B. Between March and April, B has a big increase, and between April and May, C has a relatively large decrease. Between April and May, B has a smaller decrease, and between May and June, C has a smaller increase. Between May and June, B has an increase larger than the decrease but not as large as the first increase, and between June and July, C has a decrease larger than the previous increase but not as large as the first decrease. C is the correct option.
Questions #5-6 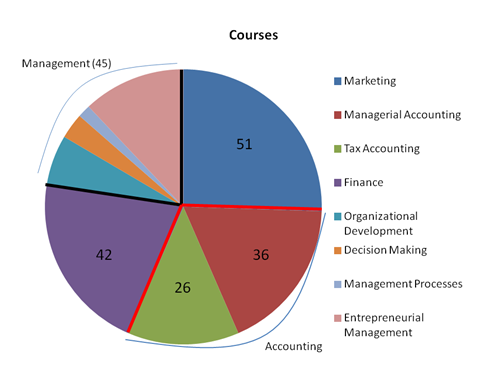 The above pie chart gives the number of course offerings in the business school in the four subject areas: Management, Marketing, Accounting, and Finances, and some of their subareas. In a geometric progression, each term in the list is obtained by multiplying the previous term by a constant factor. If there are 12 Organizational Development courses, and _______ courses offered in the other subareas of Management, then the course offerings in the subareas of Management could be ordered into a geometric progression.
Question 7 Explanation:
We can see from the chart that there are four subareas in Management, so you can immediately eliminate the options with only 2 other items on the list. A geometric progression means that the next item in the list can be calculated by multiplying the current term by a constant factor.

If you chose 2.9%, don’t forget to consider both possible orders for selecting the two courses, not just one of them (45/200 * 26/199). If you chose 12.6%, you can’t just square the possibility of selecting either a management or a tax accounting course, because that leaves open the possibility of selecting two of one and neither of the other. If you chose 23.6%, remember that there are 200 total courses, not 100.
Once you are finished, click the button below. Any items you have not completed will be marked incorrect. Get Results
There are 8 questions to complete.
Return
Shaded items are complete.
Return
You have completed
questions
question
Your score is
Correct
Wrong
Partial-Credit
You have not finished your quiz. If you leave this page, your progress will be lost.
Correct Answer
You Selected
Not Attempted
Final Score on Quiz
Attempted Questions Correct
Attempted Questions Wrong
Questions Not Attempted
Total Questions on Quiz
Question Details
Results
Date
Score
Hint
Time allowed
minutes
seconds
Time used
Answer Choice(s) Selected
Question Text
All done
Need More Practice!
Keep Trying!
Not Bad!
Good Work!
Perfect!